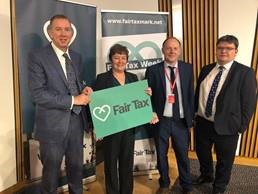 Highlands and Islands, Scottish Labour and Cooperative MSP, Rhoda Grant is urging people across the region to add their name to a new petition opposing bailouts for businesses who avoid tax.

The campaign is urging the Scottish Government to make sure that any Government bailouts provided to companies due to the coronavirus should have three simple Fair Tax conditions attached, so in the future tax avoiders cannot benefit from a public purse that they haven’t paid into.

Research has found that three-quarters of the UK public would rather shop with or work for a business that can prove that it is paying its fair share of tax.

The campaign asks that businesses publish a fair tax policy which includes a commitment to no tax avoidance, no tax havens and no profit shifting. The publication of real profits, losses and tax paid on a country-by-country basis and also the publication of details of firms real owners and beneficiaries.

“After this crisis is over we must rebuild and reform Scotland’s economy. We cannot go back to ‘business as usual’ after covid-19 and the Scottish Government should send a clear message that the days of the state bankrolling tax-dodging companies at the expense of the domestic economy are over.

“By only providing support to companies that pay appropriate levels of tax, the Scottish Government can ensure that the money to support Scotland’s economy stays in Scotland.

“Too many multinational companies avoid paying their fair share by fudging where their profits were really made. If businesses are abiding by their policies, they must lift the lid on their accounts and publish their profits, loss and taxes paid on a country-by-country basis.

“The Labour Government in Wales are leading by example on this and have ruled out any of its £500m Economic Resilience Fund, which has been put in place to help businesses, charities and social enterprises, will be granted to businesses reregistered in tax haven who don’t pay their fair share.”

The Co-operative Party Petition link can be found here.