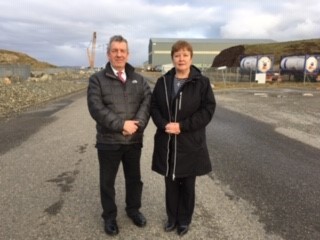 Highlands and Islands Labour MSP, Rhoda Grant, is furious that the UK and Scottish Governments have failed the workers at Arnish by claiming there is no legal route to provide further financial support to BiFab in its current form.

Scottish Labour’s Economy, Jobs and Fair Work spokesperson, Alex Rowley, has called for the Scottish Government to publish the legal advice that led them to make a judgement to pull the guarantee.

Mrs Grant said “This is devastating news for the Arnish workers, their families and the wider community in Lewis. This decision needs to be properly scrutinised and the Scottish Government needs to make the legal advice public in order for that scrutiny to take place.”

She continued “Instead of blaming the yard owners and setting up another talking shop (Working Group), Scottish Ministers should be looking to their own actions. The Scottish Government, far from saving BiFab, appears to have cost it contracts which has damaged the Western Isles economy.”

“While both of our governments try to turn their backs on the workers at Arnish, I will be pressing for the Lewis yard to be decoupled and allowed to peruse contracts as a separate entity.”