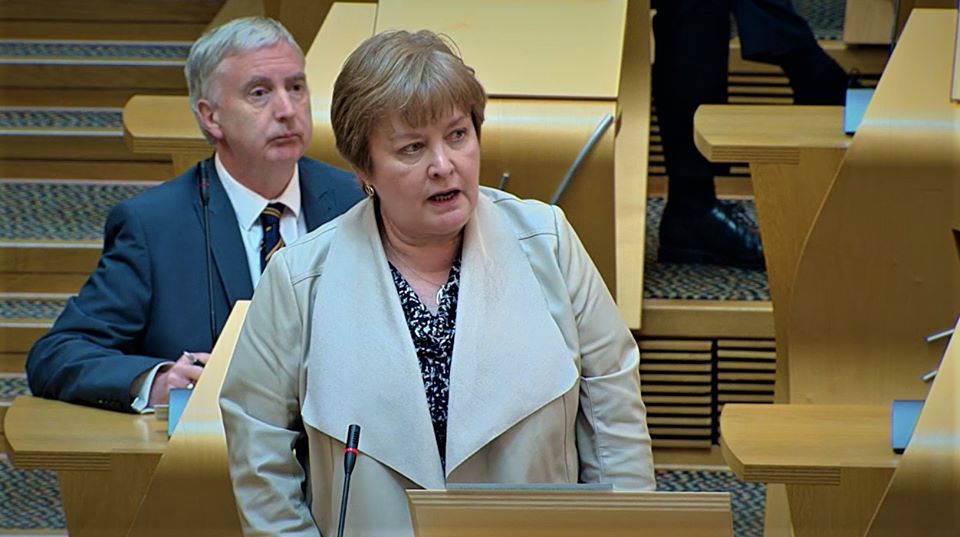 The First Minister was challenged in the Scottish Parliament’s chamber today on her government’s Covid vaccine roll-out on the Isle of Mull.

At First Minister’s Questions, Rhoda said: “I have been contacted by a Mull resident who told me the slow vaccine roll out was causing fear and alarm across the island. He said he was told the vaccine would not arrive on the island until the beginning of February, by which time, as the First Minister clearly stated today, all over-80s elsewhere will have had their jabs. Furthermore, the Cabinet Secretary for Health reassured the Parliament that there would be no postcode lottery with the vaccine – especially in rural areas where there has been inadequate testing. Can the First Minister therefore reassure people over 80 in Mull that they too will have their vaccine by the first week in February.”

The First Minister was unable to do so.

She confirmed that the first week in February was the target date set for all over 80s to be vaccinated with the first dose. And she gave a commitment to look into the situation on Mull and said she would come back to Rhoda as soon as possible.

Speaking afterwards, Rhoda said: “I am really concerned about the issue on Mull. The BMA this morning was still reporting the patchy distribution of vaccines. The stocks are available for this age group, we are being told there are 400,000 doses available in Scotland, and that the GPs are in place to do it. The First Minister needs to be all over this and get in there and remove whatever is stemming the flow. As has always been the case during this pandemic, the lives of our most vulnerable are in the Scottish Government’s hands. They mustn’t let people down now.”

Earlier today, NHS Highland’s Chief Executive Pam Dudek told a virtual meeting of the Scottish Parliament’s Health and Sport Committee that her health board had asked the Scottish Government for some “flexibility in how we would deal with our islands and very remote areas”.

She went on: “We asked if we could take a bundle approach and that was so that we could be more efficient and effective in the delivery of this vaccination programme as well as ensuring that small communities are protected because obviously on the islands it is very tricky in terms of the evacuation of patients.

Mrs Dudek said that “flexibility” had been granted but the board still needed to “set out for each scenario what it is that we will be doing”.

She said both Argyll and Bute and Highland Councils would be supplying cleaning, stewarding and other staff to help with the vaccine roll out.

She added; “Looking at the numbers of people that we have to vaccinate and where we need to be by the 6th of February, we feel fairly confident in our delivery of that. We have had modelling done locally, we know what our numbers are, and when you break that up across GP practices it is a more manageable figure.”

Director of Health and Public Policy Tim Allison told the virtual meeting that so far, an estimated 18,000 people had been vaccinated across the NHS Highland area.

Mr Allison said: “The progress has been variable across the whole area but overall I believe that we are making good progress.”

He estimated that about a third of all over-80s had been vaccinated, and that in two out of three of NHS Highland’s localities – Argyll & Bute and North and West Highland, all care home staff and residents have also been vaccinated.

He added: “We are still working on the South and Mid Highland area and will have completed this by the end of the week.”